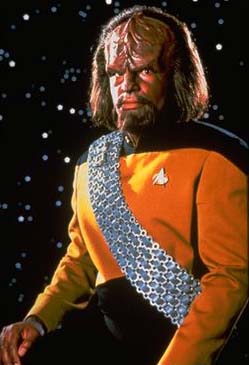 As the only Klingon in Starfleet, Worf has already achieved an illustrious and honorable career aboard the U.S.S. Enterprise as well as played a key role in Empire politics, but he keenly feels the effects of an often tragic life caught uniquely between the two conflicting cultures -- immediately evidenced by the traditional Klingon baldrics he wears over his Starfleet uniform. This inner conflict stems in part from his perception of honor as taught but not always practiced by his native people, and is complicated by family relationships which echo his duality of culture in both his personal and public life. He was born into a powerful political house on Qo'noS and carries vivid memories of a typical Klingon childhood. On his first ritual hunt before the age of six with his father's friend L'Kor, he attacked a large beast and it mauled his arm, providing a lifelong scar. Later, while undergoing the Rite of MajQua in the lava caves of No'Mat, the vision of the original Klingon warrior Kahless came to him, prophesying that Worf would do what no other Klingon had done. However, his life was changed forever in 2346 when his family was wiped out by Romulans at the Khitomer Outpost along their border; he has no memory of his father. Young Worf was thought to be the only survivor, and was eventually adopted by Chief Sergey Rozhenko, a human engineer aboard the U.S.S. Intrepid which provided the first assistance at the scene. Worf lived with him, his wife Helena, and their son Nikolai on the farm colony Gault and later Earth, where Worf had a hard time adjusting to less-violent human culture and the two boys often disagreed. The Khitomer incident also instilled in him a life-long hatred of Romulans. To feed his thirst for his native people's culture, the Rozhenkos consciously exposed Worf to as much as they possibly could -- serving him Klingon food, including his favorite rokeg blood pie, and sending him to Qo'noS for his initial Age of Ascension ceremony in 2355. Worf entered Starfleet Academy with Nikolai in 2357, but his impetuous brother left school and returned to Gault while Worf went on to graduate in 2361. The fear of depending on others to protect him had been the prime point of his own entrance exam's psych test. In 2364 he signed aboard Picard's U.S.S. Enterprise in command division as a junior-grade lieutenant, at the time wearing a century-old Klingon baldric. After the death of Security Chief Tasha Yar, he became acting chief and then assumed the post full-time in early 2365, switching to security full-time in the operations division and gaining a promotion to full lieutenant. His shipmates formally promoted him to lieutenant commander six years later with a ceremonial holographic ocean-dunking on an ancient Terran naval vessel. Aside from a few weeks of dating fellow officer Deanna Troi in 2370 on the U.S.S. Enterprise, his only serious romance involved the half-humanAmbassador K'Ehleyr. Worf had ended their initial affair in 2359, during his Academy years, but K'Ehleyr refused to begin anew and take vows after they mated in 2365 during her mission regarding the T'Ong sleeper ship incident. Worf's family tree took on surprising twists during his U.S.S. Enterprise career, beginning with the trumped-up charge that Mogh had betrayed Khitomer to the Romulans. The resulting probe turned up not only a second survivor and eyewitness to the massacre, his old nursemaid, but a younger brother who'd been left behind on Qo'noS, Kurn. Even when the traitor was proven to be not Mogh but Jared, father of the powerful Duras, Worf later accepted discommendation from Klingon society rather than cause an uproar in Empire politics had the cover-up been revealed.Worf was shocked to discover that his interludes with K'Ehleyr had produced a son, Alexander, when in 2367 she accompanied the dying Klingon Chancellor K'mpec to the succession proceedings. With her mate and son present, K'Ehleyr died after being attacked by Duras when she drew too close to the truth about Khitomer, and Worf in anguish killed Duras on his own ship. His captain was more than understanding, as he had been when Worf refused to donate blood to save a Romulan, but he was put on formal report for his actions. During the Klingon Civil War of 2367-68 Worf felt compelled to resign his Starfleet commission to become involved, but it was reactivated after the war. During that time he persuaded Kurn to support Gowronagainst Duras' sisters and their Romulan backers, standing up to the sisters when abducted and tortured. His aid of the victor Gowron eventually restored his family's honor, and Kurn won a seat on the High Council. Mogh was later rumored to be alive in a secret Romulan prison on Carraya IV, but though Worf's covert 2369 mission found the rumor to indeed be false, he did discover -- and agreed to keep secret -- a colony of shamed Klingon survivors from Khitomer, led by his father's old friend, L'Kor, and their Romulan guards who'd resigned to live with them. Worf dipped back into Klingon politics in 2370 after he questioned his own faith in the teaching of Kahless following the Carraya IV incident. His visit to the caves of Boreth, the legendary site of the greatwarrior's predicted return, was shaken up when Kahless did appear to return. Although later found to be cloned from ancient relics of the original Klingon warrior by the Boreth clerics, the cloned Kahless was ultimately accepted as a returned Emperor and moral leader.

He was even reunited with his foster brother Nikolai in 2370, when the two clashed again over the human's saving of the doomed Borallan village against Picard's orders and the Prime Directive to save his pregnant mate, a native. The two parted more amicably after the incident, however. After his mother's death, Alexander was initially sent to live with the Rozhenkos on Earth, but a year later Helena returned with him to plead that Worf take him back for support and guidance. The two shared a testyrelationship at first, but thanks to sessions with the ship's counselor -- whom he eventually selected as the boy's foster parent if need be -- they fared better. When a shipboard accident left him paralyzed, Worf considered the ritual Hegh'bat suicide until both Riker and Troi talked him out of it, pointing to Alexander's need for a parent; an experimental genotronic spine later restored his health. Shocked in 2370 to find his son returned through a time loop from 40 years in the future, be began allowing Alexander to find his own way -- even if it was not the way of a Klingon warrior. During his U.S.S. Enterprise tenure, he birthed Keiko O'Brien's baby in Ten-Forward during a shipwide crisis in 2368, his only prior experience having been a Starfleet emergency first aid class. He also taught mok'bara classes to those interested aboard ship, won a bat'tleh tournament on Forkas III in 2370, and for a time tutored Doctor Crusher on the weapon; there is no word that he took her offer to join her acting workshop. He trains with a multi-level holo-program of personal combat "calisthenics," has also played Parrises Squares, and picked up the nickname "Iceman" from his U.S.S. Enterprise poker play. Other interests include Klingon novels, love poetry, and a love of Klingon opera. His favorite beverage, christened as a "warrior's drink" when introduced to it by Guinan, is prune juice. He dislikes surprise parties and diplomatic duty. Following the destruction of the Enterprise and break-up of its staff in 2371, Worf sent Alexander once again to live with the Rozhenkos on Earth and went on extended leave to revisit the Klingon monastery and clerics of Boreth in search of a spiritual answer to the letdown the rapid events provoked. He found their discussions enlightening and considered resigning his Starfleet commission, but in early 2372 he accepted Captain Benjamin Sisko's request to join the Deep Space Nine staff in light of renewed Klingon friction after dissolution of the Khitomer Accords and their short-lived invasion of the Cardassian Empire. He had all but decided to resign and join a Nyberrite cruiser crew when the Deep Space Nine offer persuaded him to stay, having felt that his Starfleet uniform was a disgrace to his own people. Early on in the assignment Worf admitted to continued bouts of depression over the end of what he perceived as "glory days" on board the Enterprise. He's countered this somewhat by taking quarters on the station's starship, the U.S.S. Defiant, and by forming a kinship with the Trill officer Dax, whose skill with the bat'tleh and mek'leth he values. He had the opportunity to meet Klingon legend Kor, but that honor too was ripped away when image gave way to reality as the two fought over the Sword of Kahless relic they found on a quest. Worf's public opposition to Gowron's invasion of Cardassia left him largely unaffected until the Empire attempted to frame him for the so-called slaughter of Klingon civilians amid a skirmish; the hoax was revealed only shortly before he would have been extradited for the crime and faced certain death. However, on Qo'noS his house was once again stripped of its honor and properties, including Kurn's seat on the High Council. His depressed brother showed up on the station asking for his own suicide rite. Only Dax's interruption stopped the ritual Worf was aiding. But after Kurn's unsuccessful attempt to work as a Bajoran deputy, Worf realized his brother had no future and, short of suicide, opted to have his memory wiped and replaced with another Klingon identity, sending him to live with a family friend. Even then he lived with the regret that his actions had been forever tainted by his human-learned values of mercy.