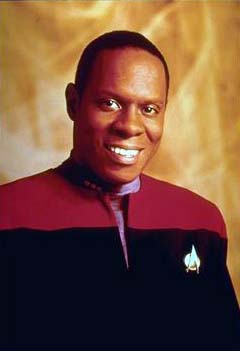 Following the tragedy of his wife's death fighting the Borg at Wolf 359, Sisko entered a dark period for three years at Utopia Planetia and very nearly resigned from Starfleet rather than take the Deep Space Nine assignment -- until an encounter with the Bajorans' "Prophet" aliens and the discovery of their wormhole helped his healing to begin at last, energizing his life once again. Even so, his one-time ambitions to make admiral rank yielded to his realization that he's more suited to making decisions work than just making them -- a prime reason for his success as a "builder" at DS9 and for Bajor-UFP relations. Sisko is very much proud of his New Orleans upbringing, where his father was a gourmet chef and insisted the family dine together to try out his new dishes. Sisko had worked summers in his father's restaurant, simply called Sisko's; he had a job by age 15 working there. Along with an unspecified number of brothers he has a sister, who lives in Portland, Ore; the boys had to pick vegetables in their family garden as youngsters. Sisko had been so homesick during his first week at the Academy that he beamed home at 6:30 for dinner to New Orleans, where his mother was still alive. Today Sisko worries about his elderly father's health and heart condition, and at one point felt helpless when it appeared he would indeed die. The elder Sisko refuses to leave his business and make the long journey to DS9, so visits are few and far between. A classmate and fellow Academy graduate was Cal Hudson, who shared his love of baseball and ambition to make captain by 30 and admiral by 40; they remained close until the Maquis crisis of 2370 split their loyalties. Another friend is now the captain of the U.S.S. Venture; another is the Tholian ambassador at DS9. As a "raw cadet" he met Curzon Dax, a joined Trill and Federation official who became his mentor through many years and assignments. When they first met on Pelios Station, a woman named Anastasia was somehow involved. A perpetual womanizer, Curzon joined him as a first-ratecarouser at least until Sisko's late 20s, well after Jake's birth. Curzon had attended his wedding and wild bachelor party as well. They toured the Cliffs of Bole together, and he once bet against he and Hudson's dom-jot play against two Zakdorn at Pelios Station. Sisko met his future wife Jennifer on Earth immediately at Gilgo Beach after his Academy graduation in 2353, and they grew serious about each other and married within six months. They once shared a trip to the Mazurka Festival on New Berlin with the Hudson's. Ironically, Gretchen Hudson died within the first year of Sisko's stint on DS9. After Jake's birth the men recalled their best family trip ever was camping on Itamish III. Sisko and Curzon served some months on the U.S.S. Livingston. He was a veteran of the last UFP-Tzenkethi War during his tenure as lieutenant and lieutenant commander under Capt. Leyton on the USS Okinawa. Leyton promoted him in rank to become his first officer. Sisko's next assignment on the Saratoga came to an abrupt end in early 2367 at Wolf 359, where his wife was killed, and he and Jake barely escaped. (A reunion with Jennifer was bittersweet when the short-lived encounter occurred in the mirror universe after he was forced to replace his counterpart, the assassinated leader of the Terran Rebellion, in talking her out of working on a deadly project for the Alliance there.) Leyton, by then an admiral, nominated Sisko for the DS9 post when it came open upon the Cardassian withdrawal. When he considered resigning from Starfleet to avoid DS9 duty -- thanks in part to his own bitterness toward Capt. Jean-Luc Picard, who was kidnapped and for a time transformed by the Borg to lead the Wolf 359 assault -- Sisko thought of directing construction of orbital habitats on Earth, the field of astrionics he was asked to teach at the University of Vasteras in Sweden. Instead, Sisko not only decided to stay but convinced Bajorans and Promenade merchants like Quark to stay. Sisko's comfortability in his role at DS9 and as a religious icon to Bajor has gradually developed as he's grown comfortable in both roles. Dukat once called him the most joyless and least vulnerable human he's met -- a compliment that was eventually rescinded. Torn between the important joint subspace relay project with Cardassia and the looming chance it might be a foretold catastrophe of Bajoran prophesy, he went ahead with a risky save that not only allowed the relay to work butfulfilled the prophecy in a different way. The incident left him more open and reflective about other prophecies regarding the "Emissary." He sat in for the ailing Bareil during the secret Bajoran-Cardassian peace talks on DS9, but refused Kai Winn's later request for Starfleet Security troops or aid during her hunt for fugitive Shakaar, based on the Prime Directive. Sisko does have a temper and is usually unswayable when his mind is made up. He carries a small scar on his lower lip from the impact of a ring where Curzon decked him after he took on an Argosian lieutenant. As a junior officer on VIP escort, he once slugged a visiting ambassador for sexually harassing a female ensign. When perturbed in surprise he often utters an odd yipping sound.He initially butted heads with Kira and Odo. In on instance Kira went over Sisko's head to Starfleet. He eventually grew to value their opinions and abilities as time passed. Sisko has stood by Kira during her battles with the Bajoran Provisional Government and been aware of her discomfort at his dual role as her religion's "Emissary." Likewise, he has defended Odo's performance from past criticism by Starfleet regulars, and refused to desert him more than once.

It is certainly with Dax that Sisko has the most history. He still calls her Curzon nickname for "old man" and continues their friendship of many years, despite Dax's new outward form -- a rare exception for Trills, who usually are barred from such reassociation. He and Dax lost touch after Jennifer's death early in 2367; Curzon slowly slid into death and Dax was joined to Jadzia later that year. He hated to see her go to bewitch the Meridians, but unlike Curzon he knew she'd thought it through. He never thought he'd get used to the "new Dax," but he threatened to turn Trill society upside-down by revealing the Joran scandal after the long quest with Bashir to save Jadzia's life. After taking the risk of embodying the murderous Joran for Dax's zhian'tara, he counseled her not to let Curzon manipulate her again in Odo's form. In return, Dax may have a latent attraction to him, since under the effects of Lwaxana Troi's Zanthi fever she can't keep away from him. Sisko has long shared his love of baseball with Jake, aided by a holo-program he brought to DS9. Early on he is wary of losing personal time with him to the demands of work, and at first banned his friendship with the Ferengi boy Nog until he got to know him better. The landmarks of Jake's aging often leave him confused or anxious, as when he first dated. He knew Jake was writing, though he'd try to hide it, but Sisko was not ready to let him become a matchmaker and was miffed that his private life was so well known before he even met Kasidy Yates. Still he and the freighter captain did hit it off -- especially when she revealed her brother plays baseball in a Cestus III colony revival league. Sisko later risked shooting a then-allied Klingon ship to rescue her freighter shortly before the alliance breakup. Aside from Yates, Sisko's romantic life since Jennifer's death had only included Fenna, a telepathic psychoprojective alter ego of the Halanan woman Nidell Seyetik in 2370. Sisko maintains a healthy recreational life, led by his inherited love of cooking, especially Cajun, and occasionally prepares a hands-on meal for the staff; an old recipe for Creole shrimp is how he finally came to learn of Jake's onetime girlfriend Marta, his poetry, and his dom-jot talents. He also cooks Hungarian food when in a good mood. His usual drink on duty is coffee -- more specifically the Klingon variety, raktajino -- especially first thing in the morning; even Dukat knows about it. Kira could set her watch by it during his first year. Sisko collects ancient African art and after two years finally brought it to DS9. In 2371, Sisko threw himself into the project of building by hand and flying an ancient Bajoran solar-sail craft with Jake with a zest not seen since he built Jake's nursery -- and wound up proving a Bajoran legend about early contact with Cardassia. He has a love of baseball which shows that shows up in a holo-program, of his hero Buck Bokai, and a baseball kept on display on his desk. When playing, he is a right-handed pitcher. He also keeps up with soccer, but he has no bluff in poker and is outclassed by O'Brien and Bashir in darts. He does play 2-D and 3-D chess, often with Dax. Befitting the crossroads culture of his command, he's been reading the Ferengi Rules of Acquisition as of his third year on the station, and hosted a Gratitude Dinner during the same-named festival in 2371. Professional Assessment: Report of Starfleet Command Evaluation Board Sisko has been an exemplary commander in the new hot spot at DS9, although at times he has shown a streak of stubborn independence that has defied orders yet carried the day in the long run. He disobeyed direct orders to stay at DS9 during the Romulan-Cardassian covert invasion of the Dominion, and risked the Defiant to retrieve Odo anyway. At another time he delayed delivery of a Jem'Hadar youth until he made his escape, trusting in Odo's belief the boy could be raised against his genetic programming to fight. In still another instance, he liberally interpreted the word evacuate during the Bajoran coup threat to delay the withdrawal of his forces. When trapped in the 21st century's Bell Riots, he risked his life to assume the identity of prematurely killed riot namesake Gabriel Bell and even took a bullet in the shoulder to preserve the timeline after he and Doctor Bashir's accidental arrival. Sisko has also made a bit of history in 2371 as the first sponsor of a Ferengi cadet to Starfleet Academy, Rom's son and Jake's friend Nog -- but not before putting the boy to the While Sisko's direct intervention to rescue Cardassia's civilian Detepa Council may have been questionable with Klingons nearing Cardassia Prime, along with the unauthorized use of the cloaking device, his heavily re-armed station helped persuade Gowron that division among Alpha Quadrant powers are exactly what Dominion Founders want. Sisko has risked his life on more than one occasion in the line of duty, including working from the Cardassian War room to retrieve the Defiant when stolen by Tom Riker of the Maquis, then negotiating for the release of hostage Kira, the ship and its Maquis crew in return for surrendering their leader without the customary death sentence in store. He was also ready to self-destruct the Defiant rather than let it start another war with the Tzenkethi as part of a Dominion Founder's sabotage.